Here at my house, we Hot Doggety core dev. people have a saying. Translated it goes something like: “Insert dog, receive problem.” This has hit the coder harder than me, although I have definitely had a share of it.  Mr. dachshund is somewhat unique creature, whose game behavior and animations needs some careful thinking. But after putting our heads together for quite a while, I feel it’s finally time to say it aloud: Hot Doggety is getting a single player campaign! It’s still very much under works, but I feel like we have made enough process to safely say, that this is happening.

The game will have worlds with different themes, each including their own minimap. Our first world is going have a circus theme. The idea of the campaign is, that dog agility meets twister. Your mission will be to make the dog long enough, that he is doing all the agility obstacles at once. We will have different types of obstacles, like hoops, sticks, tunnels and ramps.

The assets for the first world are done, and we are now experimenting on the game logic. Below is a screenshot of the first ever playable demo. Much needs to be done, but the joy of seeing this slowly coming to life, is giving us an amazing amount of energy. By a great coincidence, it also happens to be that 2018 is the year of the dog in the chinese calendar. We take this as a good omen and press twice as hard to deliver this to our players!

Take this waltz: recreating a dress from the victorian era

I’m starting to be able to dig deeper into the toolbox in Marvelous Designer. Still little bit intimidated to try my hand with a personal design, I did one more rehearsal from a tutorial. In Pluralsight, they have this wonderful series about creating more complex patterns where they use this victorian inspired dress as a case study.  Especially the corset section was very thorough. Here is my final result. Maybe the dress could use a little bit more puff,as the lack of it originated from the bustle cage being slightly narrow, otherwise I’m fairly happy with this. I’m  also quite happy about how I’m progressing learning this software. The UI is quite slick and the tool set is smart. There is really only one flaw I have discovered so far: “Take this waltz” from Leonard Cohen won’t stop playing in my head when doing more formal wear like this. But I probably can’t blame Clo software about that one. 😉 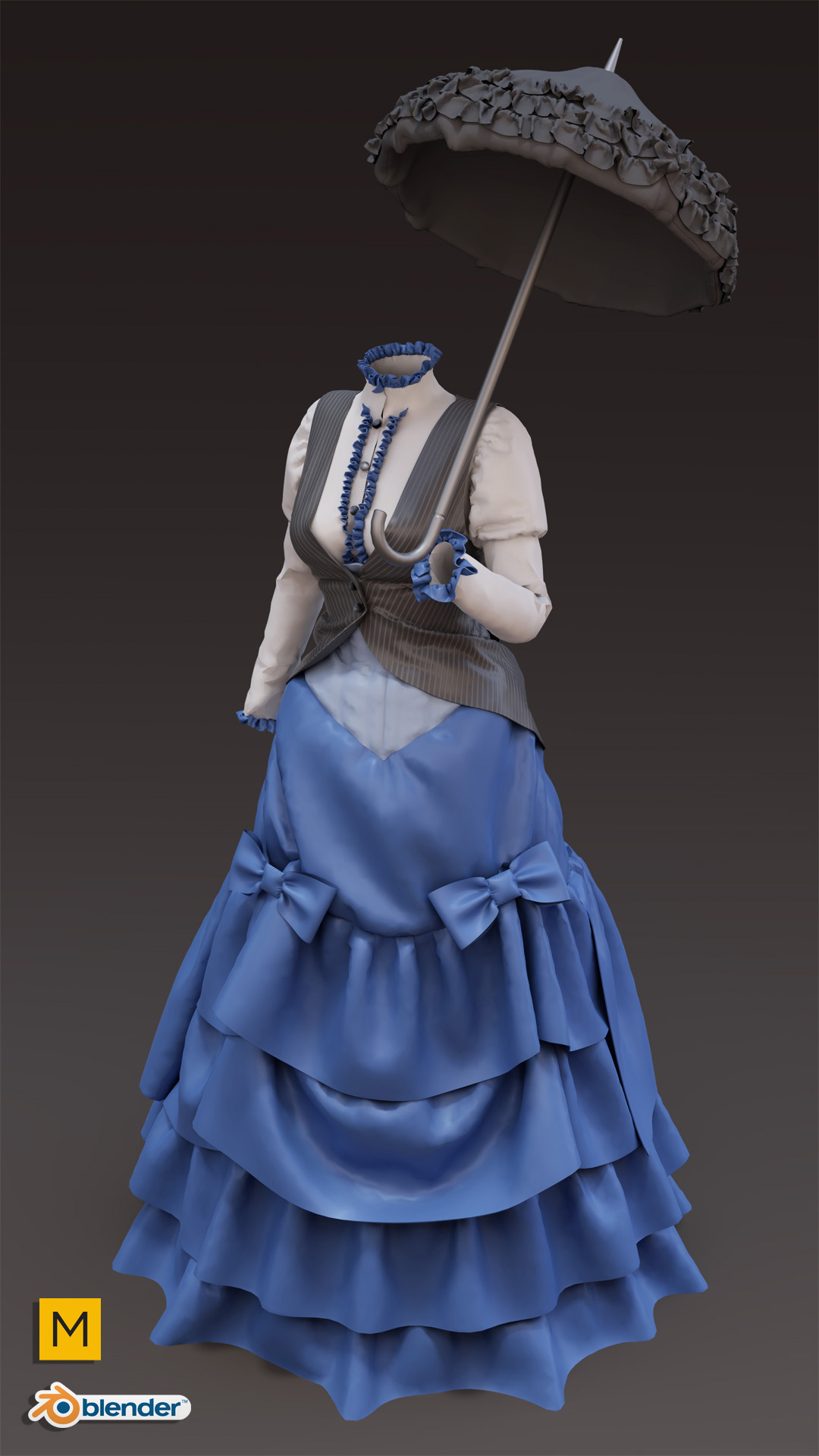 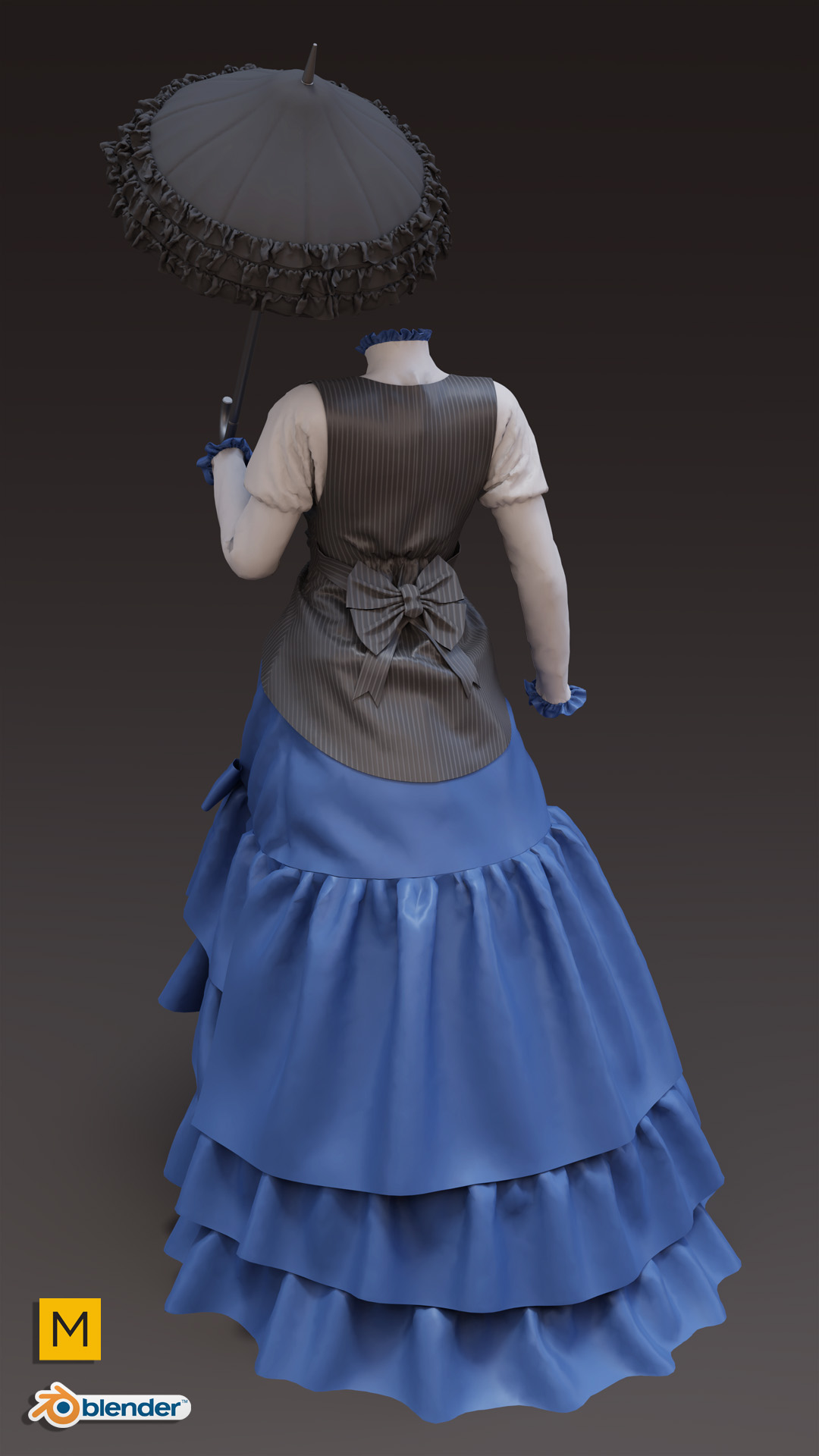 Black friday can be a dangerous time for us artists. Combine that with a credit card, and software can happen (!) Been thinking about it for quite a while now, when I saw Marvelous Designer heavily discounted, I decided it was time to pony up the cash and get this gem. After about a week of training, I’m starting to really understand a bit deeper how the clothes processing works. I absolutely adore this software. As a kid, I was never really into playing with dolls, but now I’m starting to understand, what the fuss was about!

The dress here is a simple practise piece made  with a tutorial found from the youtube channel of Clo software. I’m not all that familiar with tailoring and crafting patterns by default, so I thought it might be a good approach to first work through some basic types of clothing, before going for more original content. I’ve got few more of these random items stacked up, just have to get around to rendering some of them. 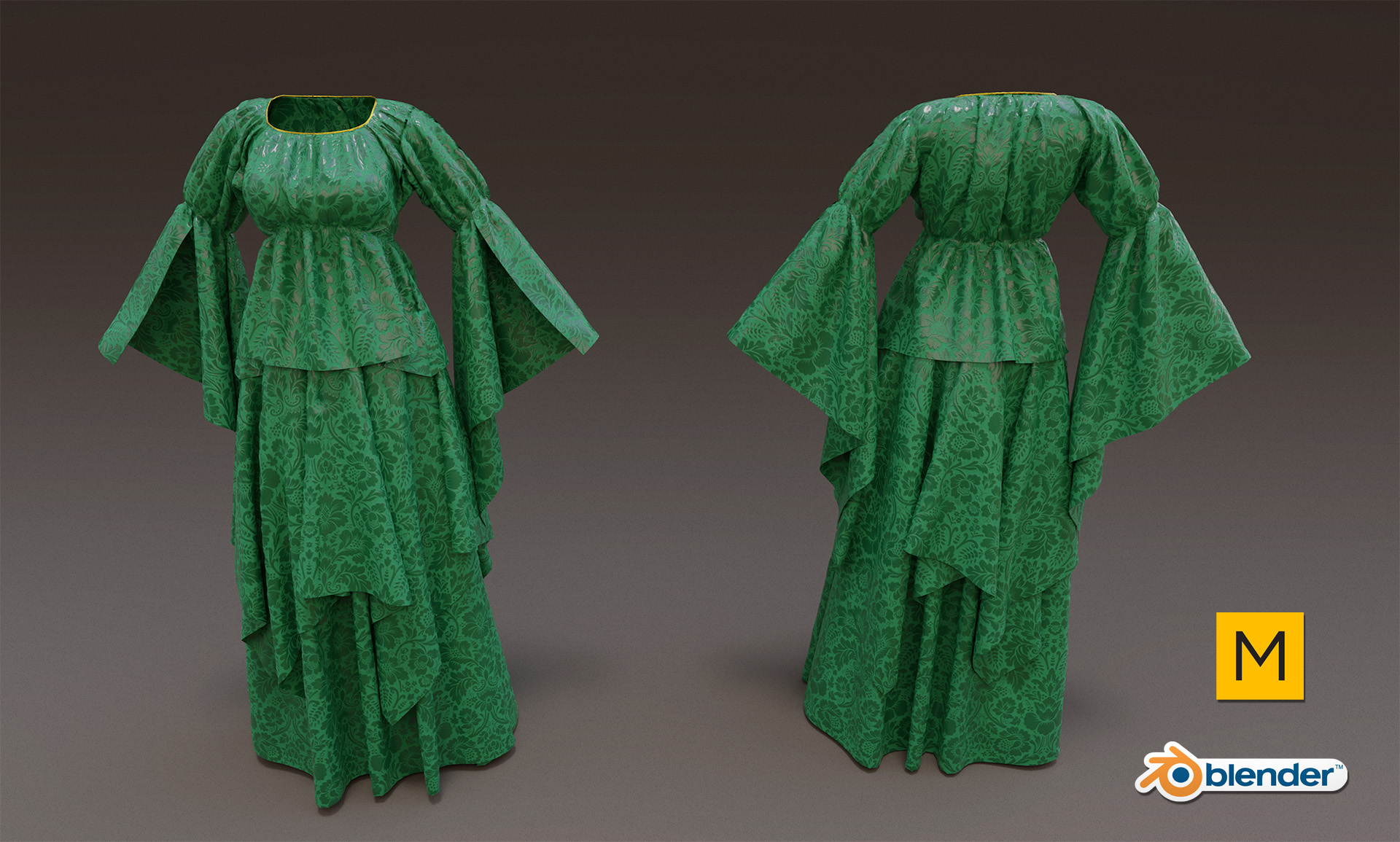 After telling myself enough times that concept art is nothing to be afraid of, I finally tried my own hand at it. Having made these small isolated clothing mannequins all week long, I suddenly felt the urge to go big with it. To not take the easy and fast one session exercises, but to see how far I can push it with my current skill set with no time limit.

Moving onto a complex concept scene like this was a major victory from all the old demons in my head, telling me not to grab that pen because I probably can’t handle it. I’m figuring this is a fairly common and simple scenery here, but I’m honestly really happy with it. I’ve decided to work it further; put on some color and lighting, finally topping it off by making it a full 3D pbr model using substance painter and substance designer. It’ll be cool to see how it evolves from an a lineart to a realtime piece. I’ll be posting an update from every stage! 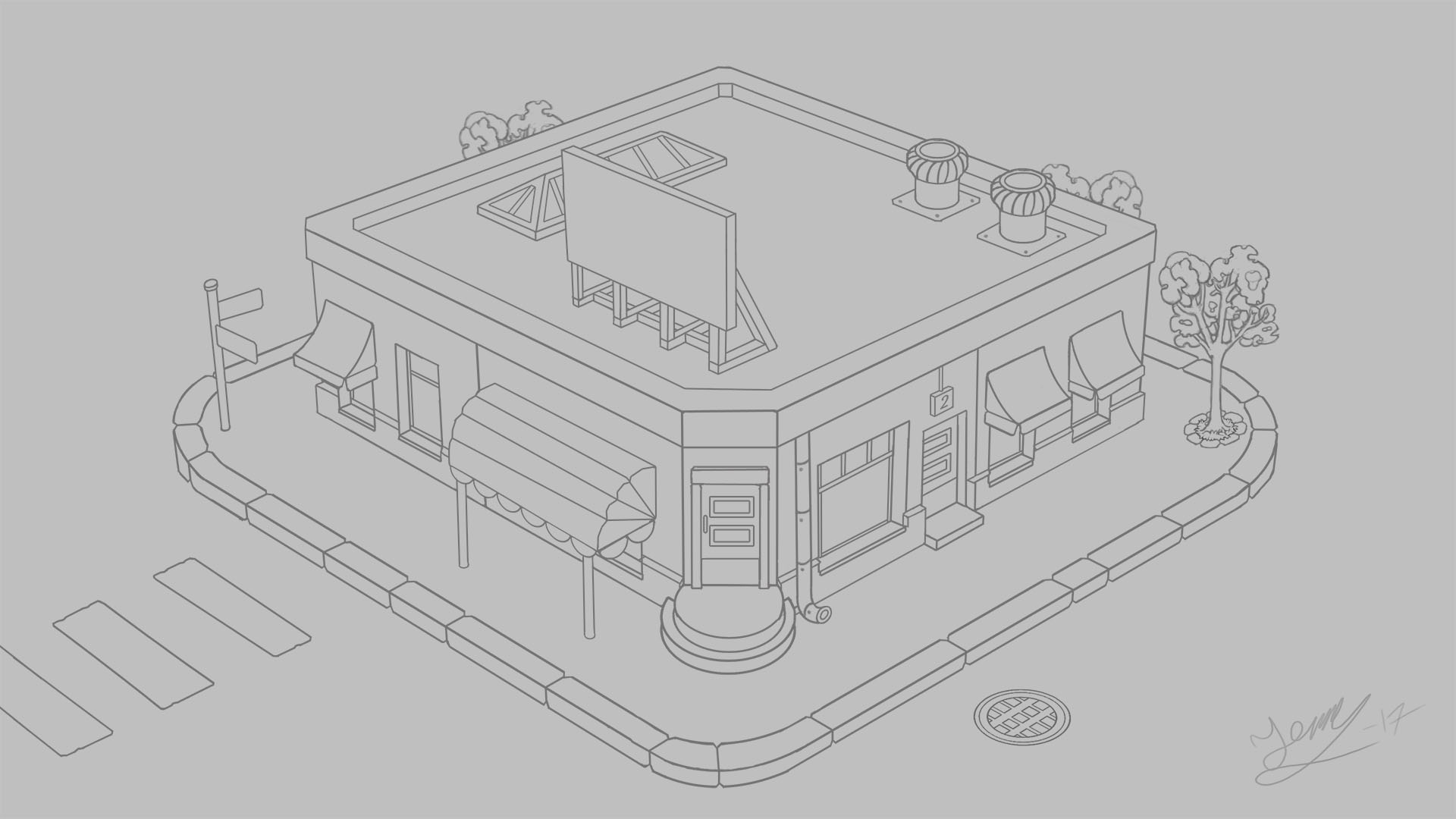 A friend of mine lent me a thorough book on clothing styles yesterday. Decided to put it to good use. These designs are mostly from the book, although all the sketching and coloring is still mine. I feel like getting bit more confident with this. I hope these designs are starting to stick to my head, so that in the future I could start mix and matching them. 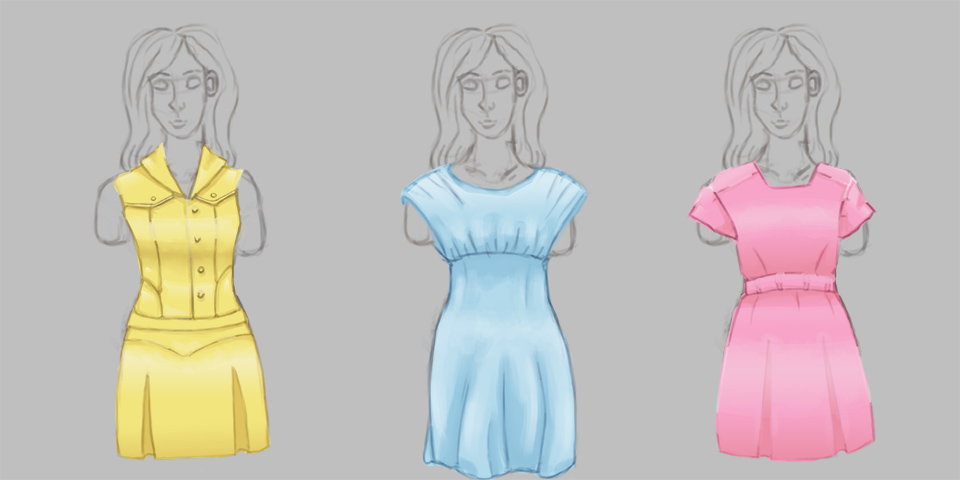 Booting up the drawing habit again

So, the fall is here. As the raindrops are drumming the window sill, it’s time to adopt back to some routines.  I’m trying to pick up the habit of drawing/painting daily again.  Here is a fast mock-up of some everyday clothes. I’m trying to learn to memorize some of the most common clothing so that it could be later drawn on the fly without thinking too much. The materials are still bit vague and I really need to work on my folds. Still figuring out so many things. But it feels really good to paint again. More eyesores– I mean dailies coming later. 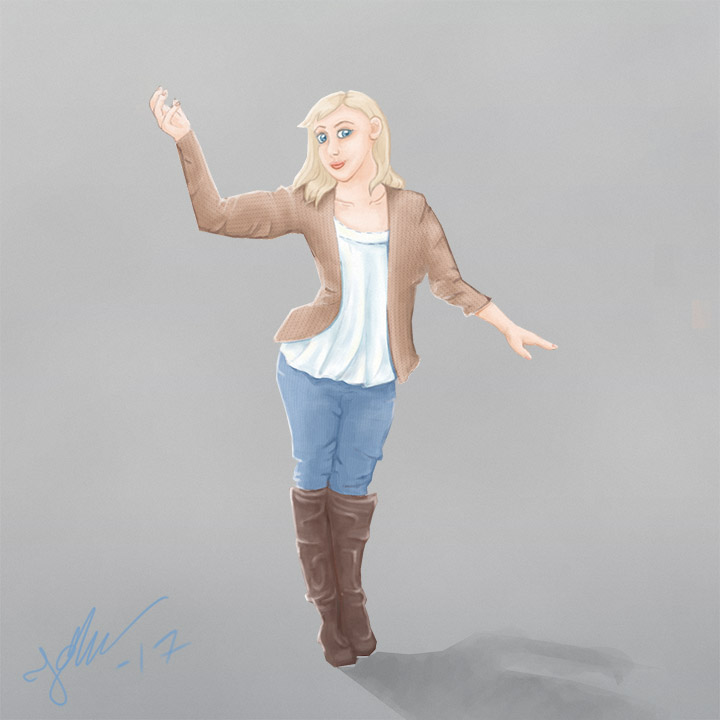 Volunteering at Ropecon: Come say hi if you are in town!

Starting this friday, I’ll be volunteering at Ropecon, the massive roleplaying hobbyist event taking place each year at the end of July. The fair has everything ranging from table top games to cosplay and it even has show wrestling. This is my second year volunteering. I am sort of a borderline almost-hobbyist, my bridge being my trade as a 3D-artist and my love for games. I do also have actually quite a long history about customer service, so a friend who is involved in organizing the event, said he would be very happy to have me on board. He is probably also taking this chance to try and convert me into a full time hobbyist! 🙂

Ropecon is actually a really cool event, with an ever expanding spectrum of game-related interests on display. I warmly recommend it to anyone who is even little bit interested in fantastical subjects and game playing in any form. Also, it’s a good chance to come and say hi to me! I’d love to meet old friends and even more to make new ones! Most of my shifts are taking place at the miniature desk and table top game area of the show. It’s not a super tight schedule, so having a beer or two during the show is definitely an option. I also have been bestowed upon the magical power of giving away candy at the visitors! And if this not enough, I can also tell you where the toilets are, or sign you up for the table top game tables. 🙂 So what are you waiting for, see you at Ropecon, folks!

When a mere card won’t do: 3D-printing unique gifts for friends

Recently a friend of mine invited me to his doctoral thesis completion party. I wanted to congratulate him, and just bringing a flower or two felt like it would not emphasize the event enough. After giving it a bit of thought, I decided to model and 3D print a small statue for him. In Finland, and possibly some other nordic countries, it is a custom that the individuals who reach the doctorate level in their studies will receive the right to wear a specific type of sword and a top hat. According to the lore, the sword symbolizes the strength of knowledge against ignorance. Never the less, these items were found to be rather pricey. As they are always handmade by request, my friend thought he may not bother. That’s when I saw my chance: he earned that sword and that hat and he should absolutely have those.

I quickly started prototyping a small statue which would feature those items. At first, I really wanted the items to be removable, so they could be taken of the pedestal and put back. Unfortunately, this proved to be highly difficult with such a small scale (12cm), where an error of only 0,5mm would be enough to break the system. I didn’t want the system to dominate too strongly where I could place the items on the pedestal, and with the pedestal being hollow for budget reasons and the pillar rather narrow for aesthetic reasons, it was just impossible to lay the sword on the pedestal in any more relaxed manner. In the end, after multiple complicated tests, I decided to drop the functionality and go with a solid statue.

The statue was printed with a Formlabs 2 at the library of Iso omena, Espoo. The base material was black resin. The print took about 10 hours and the machine was set at the best possible resolution. The figurine was then spray-painted with miniature colors, first grey and then finally warm white. This was to prevent the black base color from having a distorting shade on the white. A final touch of darker color for little bit of ambient effect for the crevices was added. I’m quite happy how this turned out. I am not really a miniature hobbyist, so the painting job is somewhat inaccurate at places, but the Formlabs is an incredible printer when it comes to precision. The result: The fresh doctor was delighted by his newfound office decor and promised to place it so that it would invoke envy among colleagues. 😉 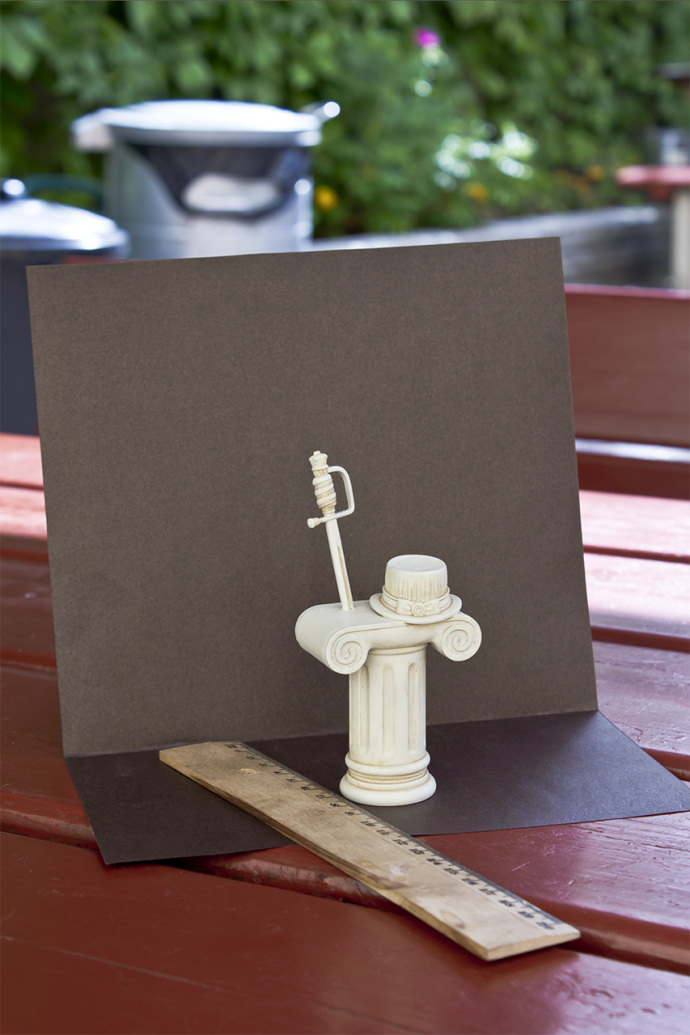 A ruler for scale. The height is about 12cm. 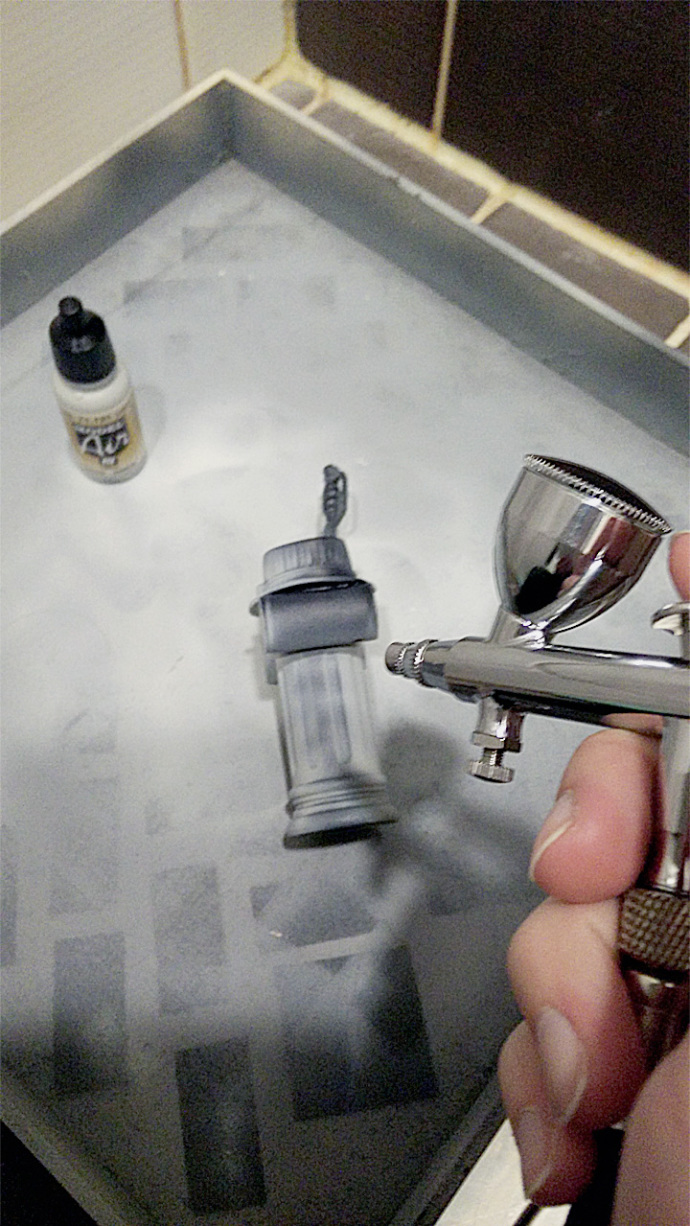 Putting on the first light grey layer of paint

Substance Painter, it’s one hell of a drug

A little update on my rocket project. The hull is now about textured; time to move on making some befitting scenery! 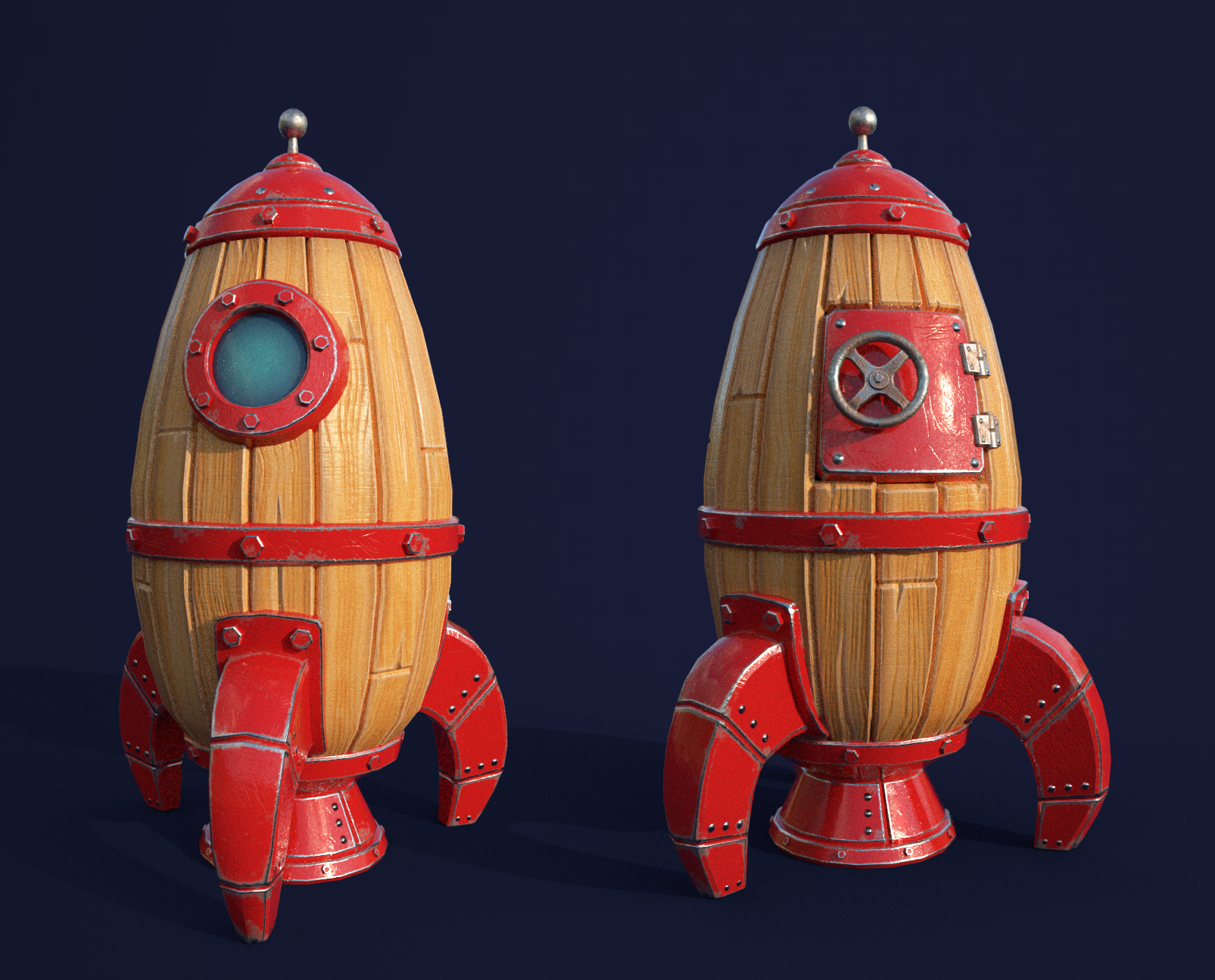